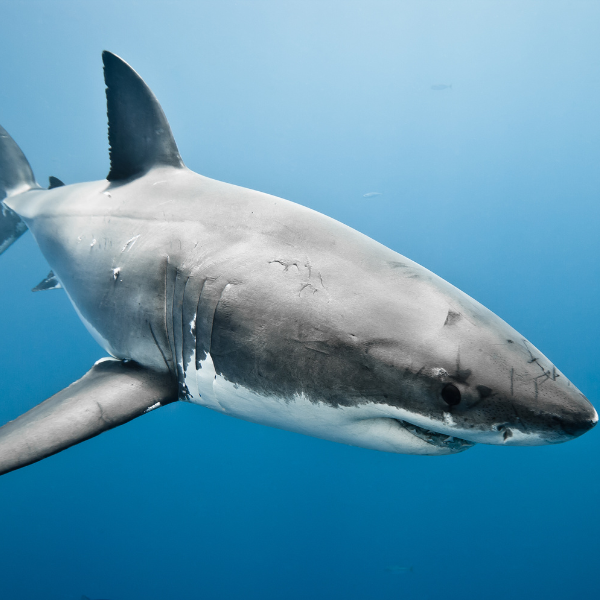 In 2018, Bowlby and her team tagged a white shark off Nova Scotia, marking the first time the species had ever been tagged in Canadian waters. The following year, Bowlby’s team tagged a 16-foot female adult white shark with both a pop-off archival satellite tag and a Vemco V16 (16mm; 10-year life span) acoustic tag provided by OTN. This year, they did it again with the help of DFO field technician Warren Joyce, OTN field technician Nathan Glenn, and Art Gaetan, retired captain of Blue Shark Charters, a fishing and research charter based out of Eastern Passage, N.S.

Though much of the scheduled field work was limited due to pandemic protocol, this year’s expedition still totalled seven missions—six for the deployment of acoustic receivers to build on an existing tracking array, and one to tag a white shark off the coast of Nova Scotia via the Knot 4 Sail, Gaetan’s 35-foot Magna Craft.

While researchers know the white sharks’ general range, there’s always uncertainty around when—and if—the sharks will be present while researchers are on the water. Weather and water temperature can change on a dime, making their movements less predictable.

Bowlby tends to draw on past successes and information from ongoing monitoring, focusing her tagging efforts in places where sharks have been historically observed in specific areas. Beyond history and existing knowledge, a bit of luck is always required.

Because white sharks found in the Northwest Atlantic Ocean apparently make up one population, tagging animals throughout their range and across international borders becomes imperative. When all data are analyzed together, it ensures that researchers gather data on movement patterns from the entire population, not just regional subsets.

Bowlby’s five-year permit allows her to tag up to seven individual animals—all of which are added to the New England White Shark Research Consortium’s tally once tagged. In 2021, the consortium’s partners tagged a total of 36 individual white sharks.

The ultimate goal of Bowlby’s research program is to support recovery efforts of this endangered species in Canadian waters. Collecting data on distribution, seasonal and yearly movement patterns will support the development of targeted mitigation actions based on the places and times of year they’ll be most effective.

TAGGING FROM A DISTANCE

Little is known about the potential long-term impacts that result from invasive handling techniques. To minimize post-release behavioural changes, Bowlby’s research team avoids hauling the fish up onto the vessel. Instead, they use a shaft with a dart head and a detachable anchor to attach two types of tags simultaneously at the base of the shark’s dorsal fin while it’s in close proximity to the boat. This method allows researchers to work with sharks of any size, and is also more cost-effective because a specialized vessel isn’t required.

Yet tagging a free-swimming animal is much more difficult than tagging a captured shark, as researchers have no control over the animal’s movements.

“The shark chooses to swim where it wants, and it may or may not come close enough to the vessel to present a tagging opportunity. We tag this way because it minimizes harm as well as the potential for a white shark to change its behaviour following tagging,” says Bowlby.

“Extended recovery periods have been observed for several species when tagged following capture, particularly when the shark is also taken out of the water. We want our research to have as little impact on this endangered species as possible.”

Although rarely evaluated, both capture and handling techniques can influence the behaviour, physiology, and post-release morality of tagged species. Even if animals survive capture, behavioural changes linked to recovery from physiological stress can negatively affect foraging, and make animals more susceptible to disease, predation and/or recapture.

A paper published earlier this year in Frontiers in Marine Science points to a strong correlation between tagging methods and mortality in sharks—irrespective of other factors. For lamnid sharks (the group including the white, mako and porbeagle sharks), animals were three times more likely to die post-release after on-board handling. Researchers found that keeping porbeagle and shortfino mako in the water—both overfished in the North Atlantic—was optimal for their survival and for the mitigation of post-release behavioural impacts.

“While we know that white sharks survive following tagging, we don’t want to discount the possibility that stress can lead to longer recovery periods,” says Bowlby.

WHAT TAGGING CAN TEACH

Unlike terrestrial animals that can be monitored from birth to death, aquatic animals are exceptionally difficult to observe in their respective environments. Bowlby uses a combination of acoustic and satellite tags to conduct her research in pursuit of acquiring different types of information.

The pop-up archival satellite tags (PSAT) used by Bowlby give daily information on white shark  habitat use and environmental preferences by recording the locations, depths and temperatures experienced by the animal. When the tag pops off on a preprogrammed date, it floats to the surface to relay data to the ARGOS satellite network. Researchers receive information from the entire deployment at once, which can capture up to 12 months of data.

Acoustic telemetry is a second monitoring method, and one of the few that allows researchers to follow the same animal for up to 10 years. This type of monitoring is critical in answering questions about site fidelity—an animal returning to the same place many times—or to determine population structure—the tendency of animals of a specific size or sex to group together.

Since 2008, OTN has been deploying acoustic and satellite tagging systems and oceanographic monitoring equipment in key ocean locations and inland waters around the world. As part of this infrastructure, OTN’s longstanding acoustic receiver arrays in the Northwest Atlantic are collecting data on the movements, habitat use, abundance and population distribution of various shark species in Atlantic Canada.

Receivers are typically arranged in a row approximately 800 metres apart on the seafloor to form an array, or a ‘listening line’, but can also be affixed to existing structures or floating buoys. When an acoustically tagged animal swims within detection range of a receiver, the signal from the tag is recorded. The receiver stores the tag’s ID, as well as the date, time and data from any sensors that may be on the tags to help answer a researcher’s study questions.

Acoustic tags are transmitters that allow researchers to track the movements of animals in both freshwater and marine environments. Each tag emits a unique code that is detected and stored by an acoustic receiver when the animal travels within detection range of the unit.

“Acoustic monitoring allows us to gather data on sizes and characteristics. Long-term acoustic tagging and monitoring are key in building on existing data sets in support of conservation and recovery planning,” says Bowlby.

The evaluation of acoustic data to date shows that individual animals tend to return to similar places in Canadian waters, demonstrating that there exists a sub-set of specific animals within the tagged population that returns to the same habitats year after year.

The satellite data elucidates how white sharks use the water column, which temperatures and depths they prefer, and how individual animals change their behaviour over the course of the year. While in Canadian waters, white sharks tend to be found in the upper 50 meters (~165 ft) of the water column, and in coastal areas that are 200 meters (~656 ft) deep or less. Once they leave Canadian waters, they start to dive deeper, and spend most of their time in warmer water.

These data sets are improving understanding of the distribution and migration patterns of the species and of their use of Canadian waters–key information to answer critical conservation questions, such as estimating the amount of habitat for white sharks at the northern limit of their range.

Sharks are top predators and ecosystem regulators, and may face increasing pressure from climate change, overfishing and habitat destruction.

The DFO Species at Risk and DFO Fisheries Management departments are using the data made available from Bowlby’s research program—which includes tag detections, public sightings, fisheries interactions, and life history modelling—to develop and evaluate Section 74 fishing permits. These permits are issued to commercial fleets that have the potential to interact with white sharks as unintended bycatch, to ensure that commercial fisheries throughout Atlantic Canada are compliant with the Species at Risk Act. They stipulate reporting requirements and mitigation measures that are applied to each fishery to protect white sharks in Canadian waters.

Bowlby’s work is designed to support critical habitat designation and recovery planning for white sharks, which is required as part of the recovery strategy for this endangered species mandated by Canada’s Species at Risk Act. Results have been used in population modelling by the Committee on the Status of Endangered Wildlife in Canada (COSEWIC) in its ongoing assessments of the population status of white sharks in Canadian waters.

“There’s still much to learn about these ancient apex predators. Current data sets are a building block in the development of a conservation framework, where the steps becomes clearer as we gain more insight on white sharks,” says Bowlby.

Citizen science is also contributing to increased knowledge of white sharks. Records of sightings help researchers build a sense of how widely the species occurs in Atlantic Canadian waters.

For those lucky enough to catch a glimpse of the animals, the Canadian Atlantic Shark Research Lab encourages reporting sightings, which can be emailed or submitted through the addresses below: